Over the years that I have been reading Tarot, I have used many decks, from the Smith-Waite (“Rider-Waite”) to David Palladini’s “Aquarian Tarot”, and numerous others. 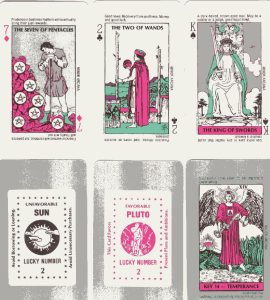 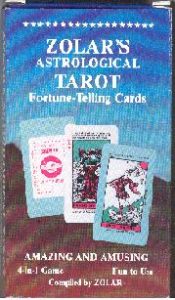 My very first deck was The Zolar Astrological Tarot, which is a strange Chimera indeed. It is a double-sided deck of 56 cards that touts itself as ‘four decks in one’. The minor arcana (and regular playing card symbols) are on one side, the majors and astrological symbols on the other side.

The images shown here are of the 1983 reissue by US Games Systems, mine was the earlier 1968 edition. The deck consists of 56 cards. Printed on the cards are the Minor Arcana, (complete with playing card designations and interpretations of them as tarot cards (both upright and reversed. On the back of these cards are the 22 cards of the Major Arcana and several “astrological cards” with planetary and astrological signs and information. So, you don’t have a complete deck of 78 tarot cards on one side, some of the cards are on the back of other cards.

As a new reader at the time, I hated that you couldn’t actually do a full reading with them, and quickly replaced this with something more conventional, which was a version of the Smith-Waite (Rider) tarot, printed like medieval woodcuts and in very earthy tones. I lost this deck several decades agi, and have never found another one identical to it.

The other deck I acquired at that time was the Swiss 1JJ Müller Tarot, which I use to this day. 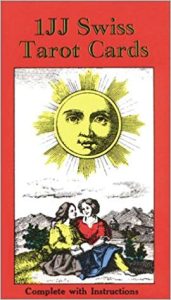 The 1JJ Swiss deck is derived from the Tarot de Besançon which itself comes from the Tarot of Marseilles. It is an Italian suited pack which substitutes the figures of Juno and Jupiter in place of the Popess (The High Priestess in many modern decks) and Pope (Hierophant) of the Tarot of Marseilles. The first version was produced between 1831 and 1838 in the card factory of Johann Georg Rauch. In 1965 the Swiss card game firm, AGMüller, issued a reprint which is distinguished by its cleaner lines. The deck owes its name to this edition, the “1” simply being a number within the product line and “JJ” the replacement of 2 trumps by Juno and Jupiter. My copy of this edition dates from about 1969, and was acquired either while I lived in Las Vegas, Nevada, at Bell, Book & Candle, a metaphysical shop co-owned by Sybil Leek at the time (which I did not know back then, otherwise I would have spent much more time there than I did as a 9th Grader! (The other likely source would be “The Magic Shop” in Lancaster, California, which I frequented often anytime I was in that town from 1968 through 1972.)

Of the decks that I use most often, the 1JJ Swiss is the one I use most, followed by a variant of the Smith-Waite, as colored by Fankie Albano, which I own in both full-size and a miniature, pocket/purse size. I am very fond of the miniature decks, because they fit comfortably in my hand, and are small enough that I can carry several similarly sized decks with me most of the time. At present, I generally carry the Albano-Waite, a miniature Tarot de Marseille, and a miniature Visconti-Sforza deck.

I’m growing very fond of the various Visconti decks, and currently own copies of the Visconti-Sforza, Visconti Modrone Tarot (aka Visconti Cary Yale), The Golden Tarot, and the Sola-Busca Tarot which is widely believed to be an early Visconti Deck.

The Visconti Modrone Tarot is from the 15th Century, fully restored, composed of 80 cards of a very large size (90×189 mm/3.5×7.4 inches) and printed in lavish gold foil.

No comments to show.
↑